In the highly competitive market of San Francisco’s thriving nightlife, DJs are forced to a higher standard of excellence and Miss Haze is nothing short of the best. Equipped with a whole lot of talent, she started Djing at the age of 15 and quickly became a skilled and respected tastemaker with an ear for electronic music. This triple threat DJ/MC/producer captivates people with her magnetic personality and vast knowledge of music. She is currently the bay area’s leading female DnB DJ, earning her residencies with Irie Cartel and Shelter, SF’s longest running DnB night. She threw her own successful night at Bass Cellar, making her an essential contributor to San Francisco’s Drum and Bass scene. Her continually growing catalog of remixes and original music spans several genres and her most recent EP “Smoke City,” out on Muopia Records, made it to #15 on Beatport’s top Drum and Bass charts. Collaborating with several artists from all around the country and upcoming releases on multiple labels, her production skills are in high demand. People stop and notice when this diva rocks the stage with her innate ability to tap into exactly the right vibe to mesmerize the crowd. Doing vocal performances with hard hitting artists such as Ill-esha, Freaky Flow, Wick-it the Instigator and the Widdler, (just to name a few) she rocks the mic with charismatic style, seductive melodies and a sassy flow. Most recently Miss Haze joined forces with Corrine, another hard-hitting bay area female DJ, to form the dynamic duo ‘BITCH PLZ!.’ Together they deliver a captivating stage show full of booty poppin’ basslines and sexy swag.

Always at the forefront of bass heavy music, she is an intrinsic part of San Francisco’s edm community. Whether it’s on the mic, from behind the DJ booth or in the studio making hits, Miss Haze owns it and throws down ill-tight sound wherever she goes. 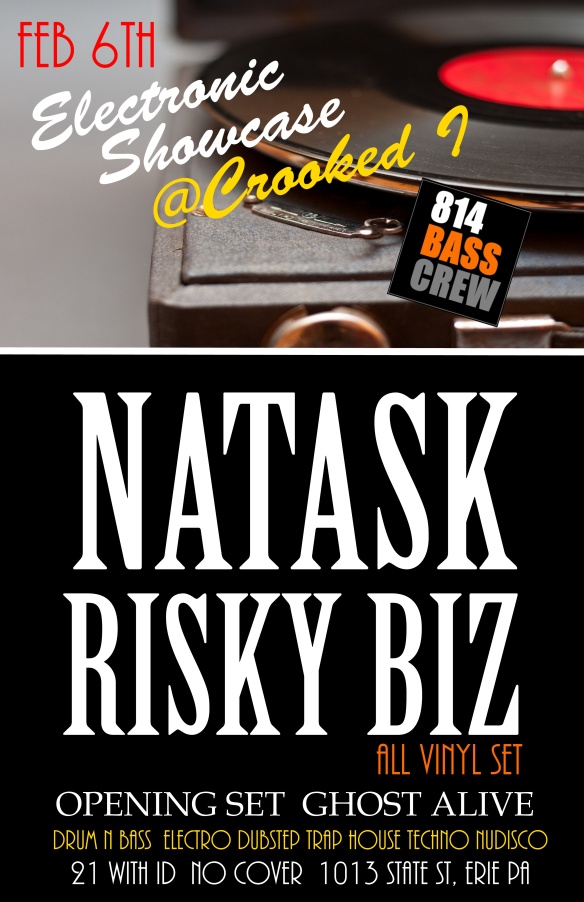 Feb 6th The Electronic showcase with NATASK…. EDM monthly at the crooked I is back with special guest RISKY BIZ, making his way back to the crooked I stage with his signature ALL VINYL set, featuring some of the biggest Dubstep and Drum n Bass tunes… as always Resident Host, and DJ…. NatasK will be bringing a mixed bag of favorites to keep the Dance floor Smashing! There will be an opening set from GHOST ALIVE, playing a unique House/Electro Set…. Get ready for ELECTRONIC SHOWCASE….. Erie’s Longest Running EDM Monthly!!
Spinas….
NatasK- www.814basscrew.com Dub/Trap/DnB Electro music
Risky Biz- VINYL SET Dnb/dubstep
Ghost ALive- Special House set